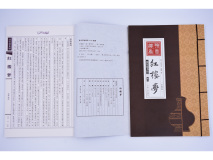 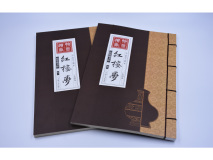 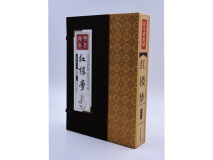 One of the Four Great Novels of Chinese classic literature, Hong Lou Meng (Dream of the Red Chamber), also known as Shi Tou Ji (The Story of the Stone), authored by Cao Xue Qin (circa. 1715 – 1763 AD).  It was written sometime in the middle of the 18th century during the Qing Dynasty. It is considered a masterpiece of Chinese literature and is generally acknowledged to be the pinnacle of Chinese fiction.

The book is believed to be semi-autobiographical, mirroring the rise and decline of author Cao Xue Qin's own family and, by extension, of the Qing Dynasty.  The novel is remarkable not only for its huge cast of characters and psychological scope, but also for its precise and detailed observation of the life and social structures typical of 18th-century Chinese aristocracy.  The novel circulated in manuscript copies with various titles until its print publication, in 1791. According to the Chinese scholars specializing in the study of the book, it is believed that the first 80 chapters were written by Cao Xue Qin, and, when it was prepared for the first and second printed edition in 1791, another writer, Cheng Wei Yuan, added 40 additional chapters to complete the book.

The main character of the novel is the carefree adolescent male heir of the family, Jia Baoyu. In this life he has a special bond with his sickly cousin Lin Daiyu, who shares his love of music and poetry. Jia, however, is predestined to marry another cousin, Xue Baochai, whose grace and intelligence exemplify an ideal woman, but with whom he lacks an emotional connection. The romantic rivalry and friendship among the three characters against the backdrop of the family's declining fortunes form the main story in the novel.